Today we celebrate SAINT NECTARIUS OF EGYPT: It is believed that his prayer heals, and the miraculous oil is located in this place in Belgrade 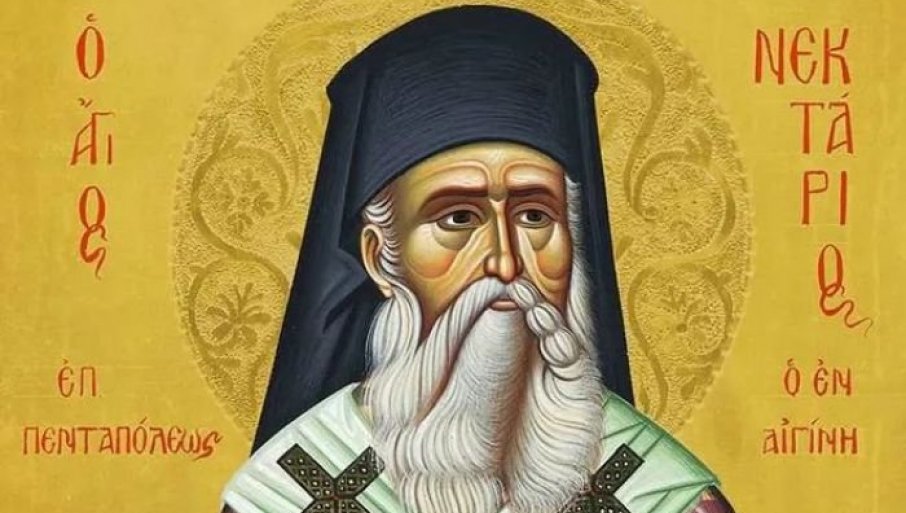 Today, the Serbian Orthodox Church and believers celebrate a holiday dedicated to Saint Nectarios of Aegina, one of the greatest healers in the history of Christianity.

Saint Nectarios was born on October 1, 1846 in Thrace. He was an Orthodox theologian and saint, and was born Anastasia Kefalas.

After finishing primary school, he moved to Constantinople, and in 1866 he moved to the city of Chios, where he worked as a teacher. After ten years of service, he became a monk and took the name Lazarus.

In 1877, he received a monastic vow under the name of Nectarios, and the rank of hierodeacon. He lived in Athens for several years, where he graduated from the Faculty of Theology in 1885. In the same year, he received the rank of archimandrite, and became the secretary of the Patriarchate of Alexandria. In 1889, he was elected Metropolitan of Pentapolis.

Nectarios received the ministry of preacher in Greece in 1892, and in the period 1894-1908. ran a theological school in Athens. After retiring, he lived in the Trinity Monastery in Aegina, after which he is named Aeginski.

He died in Athens, on November 8, 1920, of prostate cancer. He was canonized in 1961 by the Patriarchate of Constantinople.

The relics of this saint are in the monastery of Tumane near Golubac. According to the belief, various miracles of healing took place over his relics

By praying to Saint Nectarios, many believers managed to find salvation from cancer, paralysis, Parkinson’s disease, and people who had problems with kidneys, eyes and brain were healed. Some miracles have even been recorded that he saved people in various accidents – traffic, shipwrecks, and even shark attacks and snake bites.

The holy oil of Nectarios of Aegina is also known, which can be found in the Russian Church on Kalemegdan, as well as in the monastery of Rakovica.

People suffering from cancer and other malignant diseases seek help from Saint Nectarios of Aegina the most. He performed miracles, as they say, during his life, but they became especially visible after his death.

Namely, it is believed that it is enough to rub a little oil on the painful place and say a prayer to this saint, with a lot of love and respect.

In the time of great apostasy and impiety, with piety you sifted and crushed the head of the proud Satan, who wounded us.

That is why Christ gave you the gifts to cure incurable diseases, which afflicted us because of our iniquities.

We believe: the God of the righteous has loved you, to have mercy on us sinners for your sake, to deliver us from the curse, to deliver us from sickness and to glorify in his universe the terrible and glorious Name of HIS, Father and Son and Holy Spirit, now and always and centuries centuries. Amen.

EARTHQUAKE IN SERBIA AGAIN: Soil does not stand still, earthquake registered near Leskovac

WANTS TO MARK CRIMINALS WITH SERBS: “The case of Mladic’s mural” is part of a deliberate strategy directed against Belgrade and Banja Luka

ROSU WITHDRAWED FROM THE MUNICIPALITY OF ŠTRPCA: Video surveillance cameras were taken away, no arrests were made

THIRD RECOGNITION FOR THE PALMA FROM THE SPC: Dragan Marković received the Order of the Holy New Martyrs of Kragujevac, First Degree

WANTS TO MARK CRIMINALS WITH SERBS: "The case of Mladic's mural" is part of a deliberate strategy directed against Belgrade and Banja Luka

AS OF TODAY, THEY HAVE THEIR OWN BOARD GROUP: The President and members of the Municipal Board of the SPS in Šid joined the Socialist Movement

PRESSURE ON SERBIA WILL INCREASE: Vučić – We will witness the complete destruction of the international order

“THEY CARE ABOUT WHAT SHOULD BE PAID”: Vučić on compensation to Rio Tinto for the contract from 2004 (VIDEO)