SNS PRESENTED PROGRAM PRINCIPLES Brnabić: We need children and that is an absolute priority! (PHOTO / VIDEO)

Ana Brnabić presented the four most important messages of the party.

When it comes to the economy, she emphasized that the party, everything it has done in recent years, has done together with the citizens of Serbia.

– We have prepared a document on all successes, which we called “Report to the citizens of Serbia”. We are a party that is responsible, that works in the interest of Serbia, that submits a report on what it has done clearly, transparently to the citizens, to those we work for. We will present that document tomorrow – he announced.

Brnabic said that the stories and promises were not empty when it was said that the SNS is most important for the citizens to be richer, to have jobs, perspective, as well as what they will do for them.

– We talked about concrete projects, delivered concrete results – she pointed out.

Support for families with children

– If we do not improve our demographic picture, our results are in vain. Who will use roads, schools, hospitals. We need children and that is an absolute priority.

She said that the law on financial support for families with children will be changed.

– We have more money and we want to work on it even more. We have set aside 700 million euros for the purpose of population policy. From January 1, instead of 100,000 dinars, 300,000 dinars will go. The state will give non-refundable 20,000 euros to couples to leave their parents’ home to live alone. We will try to help students to have children during their studies and so young, not only is it okay but it is commendable and desirable. We practically lose one generation because we get children late, but also the world with us. Thus, we want to improve the population policy of Serbia. We will change the law on financial support with children in order to especially reward mothers of entrepreneurs, in order to support entrepreneurial culture.

Investments in education, science and culture

– We have introduced a science fund in Serbia. We hired the first 1,000 young doctoral students. We pushed it out with political will. We made room for young scientists. By 2030, that is a very important plan to go faster than the others. They laughed, and we introduced digitalization, e-government, but we have to go further. Artificial intelligence and bioeconomy are two important things. We created an institute in Novi Sad for the development of artificial intelligence. We called some of our people from the diaspora to come back and they all came back.

She also spoke about culture and stressed how important this area is for our country.

The Prime Minister said that the plan is to arrange the archeological site of Vinca, which is one of the most important archeological settlements in the world.

Brnabić pointed out that the complete digitalization will be completed by 2023.

– The goal is to continue to go five steps ahead of the others. More and more companies are opening their development centers in Serbia. Our best experts have returned from leading foreign companies.

Serbia is building a national stadium

– We have invested a lot in sports, but the idea is to invest even more. We are starting to work on the national stadium by the end of the year, those are great things. We are also building sports facilities throughout Serbia – Brnabić pointed out.

– We must additionally strengthen the youth in the Serbian Progressive Party. The SNS is the only party that invests in young staff. We need to dedicate ourselves to spending much more time in the academy of young leaders.

Serbia is among the best in Europe

We are building nine highways and expressways 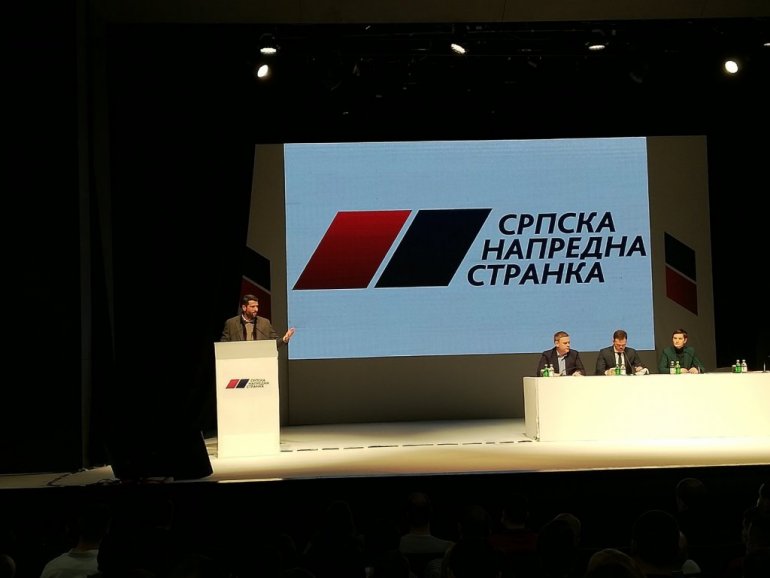 IMPORTANT FOR DRIVERS: Increased traffic in cities and on some roads

FELTON – THE DEVELOPMENT PATH OF A NOBEL MAN: Ivo Andrić was an integral Yugoslav

VUCIĆ WITH MEDEF REPRESENTATIVES: “Serbia is a place where French companies are welcome”

FELTON - THE DEVELOPMENT PATH OF A NOBEL MAN: Ivo Andrić was an integral Yugoslav

EVERYTHING READY FOR VUCIC’S ARRIVAL: Magnificent welcome for the president in Novi Pazar (PHOTO / VIDEO)

WE OWE € 26.7 BILLION TO BANKS: Indebtedness of the economy and households increased by as much as 10%, consumer loans rose the most

SINIŠA MALI: We are proud that so many people come to support us