(LIVE) ADDRESS OF THE PRESIDENT: What is more difficult than the sanctions against Russia is that the EP is asking us to recognize Kosovo (VIDEO)

THE PRESIDENT of Serbia, Aleksandar Vučić, met today in Belgrade with the Serbian member of the BiH Presidency, Željka Cvijanović, and the President of the Republic of Srpska, Milorad Dodik.

The meeting started around 10 am in the building of the General Secretariat of the President of Serbia.

After the meeting, President Vučić spoke about the agreement between Belgrade and Pristina on license plates.

First of all, the President wished Dodik and Cvijanović success in performing their new functions. He congratulated them on their success and electoral victory.

– I informed them about the situation in Kosovo and Metohija, as well as some other important events. A joint team will be formed this week, we will invest a lot of money in the construction of the memorial complex in Donja Gradina – said Vučić.

We have an increasing trade exchange as far as Bosnia and Herzegovina is concerned. About 2.3 billion in the first nine months. We are getting closer to being the number 1 partner for BiH soon – Vučić pointed out and added that it is very important to have the best possible relations.

He emphasized that in Serbia they will always have someone they can rely on. The President also thanked the people of Srpska who are always with Serbia and that they care about us as much as we care about Srpska.

Address by Cvijanović and Dodik

Cvijanović emphasized that great challenges await them in their new positions.

The Chairperson of the Presidency of Bosnia and Herzegovina, Željka Cvijanović, thanked Serbia for wanting to participate in infrastructure projects, such as the airport in Trebinje.

– In the period ahead, many questions and dilemmas need to be resolved. We will need a lot of effort and support from Serbia – she pointed out.

Dodik pointed out that this is the first working meeting after the elections and that they wanted it that way.

– We talked about all the important issues in the environment. I told the president that the international factor is putting additional pressure on Serbia and Serbia – said Dodik.

We agreed that after the formation of the government in Republika Srpska, we will hold joint meetings of the governments where we will talk in more detail about all the issues that were on the agenda today, pointed out Dodik.

Dodik stated that Serbia is a country that does not hesitate to support the territorial integrity of Bosnia and Herzegovina, which is fine.

– It is naive to believe that it is possible to separate issues and solve them in some separate way. We stand behind our people in Kosovo and Metohija – said Dodik.

Serbia is at the epicenter of international pressure both in relation to Pristina and the conflict in Ukraine, emphasized Dodik.

– As Vučić said, things are getting more complicated. The support we receive from Serbia is important. We will work on the greatest value integration of Serbia and Republika Srpska. These are special ties, which were established by the Daytona Agreement, and that should not worry anyone – said Dodik.

He pointed out that Sarajevo is blocking many important projects for Republika Srpska.

On the Resolution of the European Parliament

– It is interesting how our media behaves and how no one likes to read. The EP did not even pass a Resolution, but rather Recommendations. The essence of the text is important. It is not just sanctions, but an attempt to discipline the Government of Serbia. They skipped to read you the part that says in those Recommendations that we must recognize an independent Kosovo. So I ask all those who want to tell us about the benevolence of those who make those Recommendations – why did you hide it? Much more important than sanctions is that they ask us for mutual recognition. Why are we hiding it from people. They hide a part of our political and media public because then people would be clear about what they and such want for Serbia. Yesterday, Aliyev said one important thing – the independence of an independent state, and you, he told me, have built such an image of the country, it is not reflected in the fact that a country has an anthem, a flag and a coat of arms, but it is reflected in decision-making. I wasn’t too worried about their recommendations, until the pop and the kid were baptized. We are not interested in recognition with Pristina, not at all. We will continue to listen to everything they say, and we will make decisions in the interest of our country – emphasized Vučić.

– 10 days ago, when we were on the verge of conflict, they said not to talk about small things – we need peace, we don’t want conflicts and wars. When you make a decision that means keeping the peace – you have once again betrayed and surrendered something. What about those people? Why don’t you ask what happened to Kurti’s police who started to collect fines and then retreated. They had a better deal two days ago than the one from yesterday. It clearly says – there must be respect for all previously reached agreements. And that is the most important thing for us – our people will not be mistreated. KM plates remain and survive, since the others with the denomination of Kosovo cities and municipalities de facto do not exist, especially south of the Ibar. KM plates, as far as new cars are concerned, there are up to 90 of them per year, and as far as renovations are concerned, they run normally and there are no obligations in this regard. I even said that as long as the negotiations continue, let’s stop it. People who have KM plates, about 7,000 in KiM, can continue to drive cars without interference and fines. This is a small tactical victory that will lead us into an even more difficult situation and pressure, and that’s why you can’t see too much joy in me because I know that difficult times await us. I am satisfied that we preserved peace for our people, because those wonderful women who went out to protest yesterday deserve peace, they deserve that their children go to school normally, I am satisfied that we did not endanger the whole of Serbia, and that the whole year will be a record for us in terms of foreign investments, because as long as you have peace, you can fight for it – said Vučić.

Vučić also commented on the entire situation with the Serbs in Kosovo and Metohija.

– The situation with the Serbs in Kosovo and Metohija is boiling, it is literally boiling. People are fed up with the terror of the Pristina authorities and this is something that worries me as well. Look at yesterday’s gathering in the small town of Gornja Kusca – you had almost 5,000 people. The Serbs are fed up with everything, they are fed up with bullying, blackmailing, they are fed up with international pressures in which none of them cares, but they are treated as a national minority, even though they will not be a national minority. And this is the problem we have to face, it shows how difficult it is for them and how much they are pressed and how much they have been tortured in the previous 23 years. That’s a whole generation of 23 years. For 23 years, every day you worry whether your child will make it to school or not, whether someone will stop you at the administrative crossing and ask you for some new paper or not. Our people endured that terror and are still fighting for their people and hearths – the president emphasized.

A meeting was held with Cvijanović and Dodik 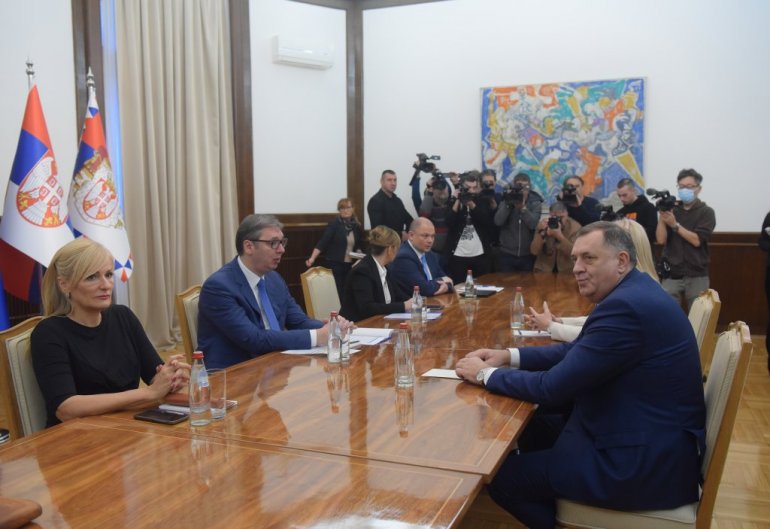 Let’s remind you, the agreement reached late last night means that there will be no punishment for Serbs in Kosovo and Metohija who refuse the labels of a fake state., and Belgrade will not issue plates with signs of Serbian cities until a final solution is found. According to the original plan of the prime minister of the temporary institutions of Pristina, Aljbin Kurti, the fine of 150 euros of our compatriots was supposed to start from today. However, Kurti gave it up under pressure from the US and accepted everything he had rejected at the last meeting in Brussels.

BONUS – THE MOST CURRENT VIDEOS

VUCIC: What did you hide that they are asking us to recognize Kosovo?

HE WANTS TO ABOLISH THE SERBIAN LANGUAGE AND BE KURTI’S CHOICE Vučić: You who criminalize Serbs give us patriotic speeches

WILL ANYONE RESPOND TO THIS JOKE WITH THE BRUSSELS AGREEMENT?! Petković on Kurti’s latest provocation (PHOTO)

WILL ANYONE RESPOND TO THIS CONFLICT WITH THE BRUSSELS AGREEMENT?! Petković on Kurti’s latest provocation (PHOTO)

CONFIRMED BY “NOVOSTI”: Tomorrow Vučić will show documents and photos about the events in Kosovo

FREEDOM FOR SERBS IS STILL OUT OF REACH: Winemaker Srđan Petrović waited for Handke, and waited to be a victim of Kurti’s terror

HE WANTS TO ABOLISH THE SERBIAN LANGUAGE AND BE KURTI'S CHOICE Vučić: You who criminalize Serbs give us patriotic speeches

UKRAINE ALIBI FOR KURTI’S “ARMY”: Pristina wants to use the crisis in Eastern Europe to accelerate the transformation of the Kosovo Security Force

STAMP ON TWO LISTS AND ONE NAME: RIK on republican and presidential elections